For many, the future of remote work will be a hybrid of both synchronous and asynchronous communication. Perhaps it doesn't need to be an either-or?

Raj Signh is cofounder and CEO of Loop Team and an advocate for remote work.

In 2012, Invision launched and was a popular tool in startup circles. If you wanted to test your product flows, you’d prototype and build with Invision. But aside from the company’s product, what many didn’t realize was that Invision was the beginning of a major remote work success story. Its rapid growth to more than 1,000 employees and its global distribution represented a stark contrast with Silicon Valley’s in-office culture.

At the same time, other distributed and remote team success stories emerged—including the likes of Gitlab, AngelList, Buffer, and Doist. While many of these companies were smaller, they too helped pave the way to a remote work revolution by publishing playbooks with remote work best practices and evangelizing into a small but fervent and fast-growing community adopting distributed work.

When COVID arrived, these early distributed-team playbooks were what companies leaned on for remote work answers, particularly in the area of communication—a significant struggle of many who began working from home during the COVID-19 crisis.

Fortunately, there was no shortage of content to guide people through this new normal. Resources such as Gitlab and Automattic CEO Matt Mullenweg have published valuable content on work, communication tools, and culture for globally distributed teams.

Matt’s oft-referenced “Distributed Work’s Five Levels of Autonomy” explains the evolution of a company through five phases of remote work. In the first phase, the company effectively maintains its in-office workflows and culture while staying distributed. In the intermediate phases, it begins to adopt new tools and workflows. In the final phases, true remote work culture is achieved as the organization communicates asynchronously. 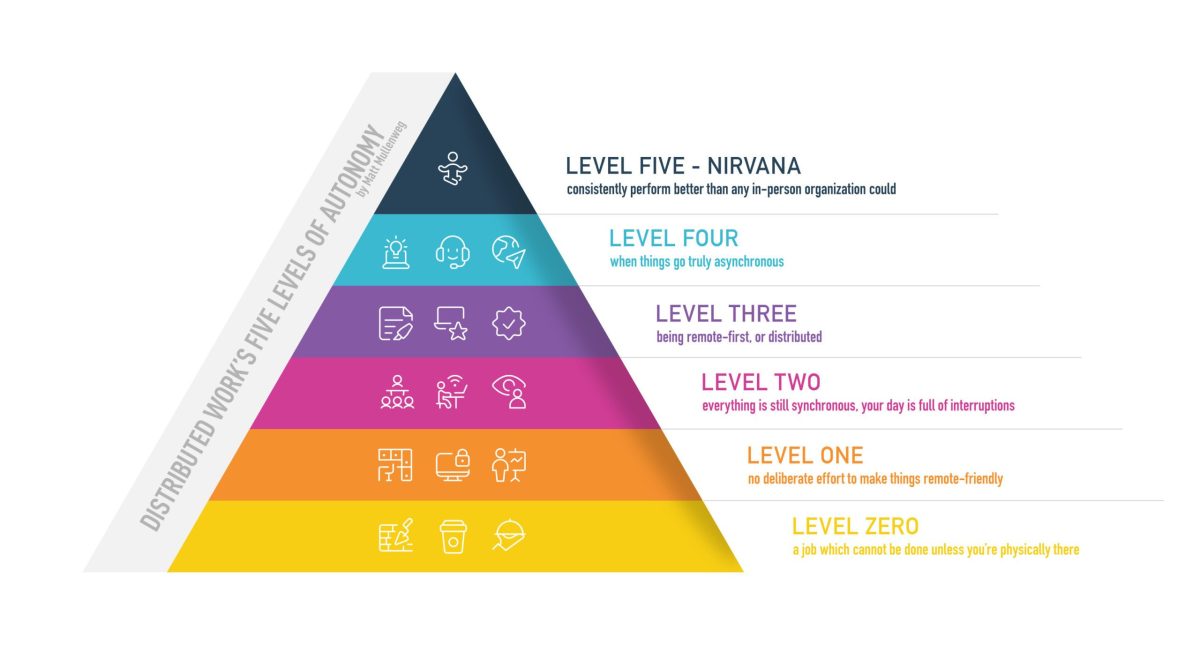 In this aspirational and dogmatic model, the role of synchronous communication is purported only for team building as required and when otherwise necessary, but all day-to-day workflows happen asynchronously. The advantages of this model are numerous: It supports those who value true work-life flexibility, it doesn’t punish those in different time zones, and it assures that most communications are written and documented, and thus transparent.

Unlike early remote-first teams, COVID-first teams are not necessarily globally distributed. These companies often comprise thousands, if not tens of thousands, of employees who were hired in an office, worked together in an office, and often enjoyed the perks of the office. These are not the old guard of remote work teams but rather a new segment, one that is scrambling to determine how best to adapt to this new way of working with circumstances that differ those of from remote-first, globally distributed teams.

In July 2020, early into the COVID lockdown, Microsoft published research analyzing its employees’ calendars pre- and post-COVID. What the company found was that people were scheduling more short-duration meetings. This didn’t surprise anyone, as these workers tried to replace the missing hallway chats, side-by-side shoulder taps, and social interactions that a physical office affords as team members collaborate throughout their days.

However, six months after Microsoft’s initial research and even longer after lockdown began, this trend hasn’t changed. We are certainly seeing more processes codified and other tools adopted, as well as employees finding their right work-life balance, but synchronous communication has remained a significant part of the work experience. Why?

COVID has created a once-in-a-lifetime scenario seeing Fortune 2000 doing remote at a massive scale. The problems and remote solutions of one globally distributed company with hundreds of employees are vastly different from those of a company with staff numbering in the thousands. In addition, most post-COVID teams started and were hired into an office environment. Even among Google’s own employee surveys, the majority of employees prefer to continue working full-time in their office and/or want to come in to the office two to three days per week. Only 10 percent surveyed wanted to work remotely full-time—a noteworthy contrast with much of the pre-COVID remote workforce. Not to mention that most of these teams are near offices and in similar time zones.

The end result is that the remote work transformation has happened but it's different than what we expected. The old playbooks have many nuggets of wisdom but in part are also deprecated as guidance for COVID-first distributed teams. We don’t know what the next 5 to 10 years will look like, but a remote work vanguard is now writing new playbooks, which prioritize synchronous communication to bring the best parts of the office into the remote work world.

How to Stay Sane at Home While Working Remotely

Whether the work is done solo or involves family members meandering nearby, remote isn’t always easy. Yet remote employees and freelancers don’t have to navigate working from home (WFH) blindly; instead, they can be proactive about making remote work comfortable and productive for the long haul. To help

Remote work is no longer just for the techie huddled behind a MacBook Pro sipping a $7 micro-roasted skinny latte. The percentage of Americans working remotely already had climbed by 159 percent over the past dozen years. Then the coronavirus pandemic hit, spurring many companies to make entire workforces remote.